The popular artists Peter Okoye and Paul Okoye popularly known as Psquare yesterday fought over the sharing of properties located in and outside Nigeria. 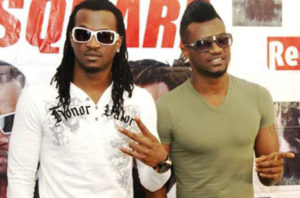 The twin after separating from the Psquare group have had difficulties in splitting the wealth accumulated under the name Psquare. The controversy came in when Paul allegedly insisted that their brother Jude Okoye was to get a great share from the wealth since was part of the Psquare group as a manager and was also a member of the family. Peter however did not agree to this method of sharing the properties as Jude was paid in full as a manager.

The fight broke out yesterday in the office of their lawyer where they had the meeting. According to our source when Peter refused the proposal to involve Jude in the splitting the three had quarrelled for some time and later engaged into physical combat which left one of them injured the other stripped naked as the other only tried to stop the fight with other people in the office.

Though their security and body guards were at the scene but could not fully engage in the fight since they understood it to be a family fight and could only get worse if they intervened. They only managed to call other close artists to Psquare and their wives to help calm the tension.

As of now nothing has been heard from the group after the fight, they simply won’t talk about it. The signing of the agreement has also been suspended as the lawyer told our source that it is not proposal to bring up the matter till the tension calms down.

The former aviation minister to Nigeria has described the current president of Nigeria General Mohammadu Buhari as “curse, affliction and genocidal maniac” who is trying to conquer and oppress Nigerians. Facebook Comments

Aki’s wife, rejected by husband’s family for carrying their son on her head

Mr Osita Iheme popularaly known as Pawpaw had it on Tuesday when his family finally rejected his wife for carrying him on her head during a family argument. Facebook Comments

SHOCKING REVELATION    How the slapping senator abused and killed his ex-wife Eucharia Ojukwu (Che Che) from Awka Etiti.   The sister to the deceased Eunice Tochukwu Ojukwu gave this report when she visited the Ikeja office of the Sun newspaper yesterday.   “I am the immediate junior sister of Eucharia Uche Ishiaku who was […]