There was a mild drama at a cinemas in Lagos after a married man allegedly beat his wife after she confronted him and his side chic at the cinemas.

The man was reported to have taken the young lady to the Cinemas to watch a movie and have fun, but unknown to him, his wife had trailed them right to the cinemas.

The moment she spotted the lady in her husband’s car, she was reported to have asked her to come down from the car, pounced on her and slapped her terribly. 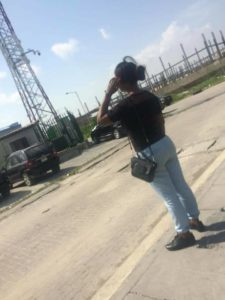 Witnesses at the scene reported that the woman had asked the young lady if she didn’t know that he is a married man with kids at home. The girl was reported to have been dismayed by the assault and couldn’t utter a single word.

The man in his reaction, didn’t take the assault on his side chic lightly and instead vented his anger on his wife.

The man then asked her to hand over the key to the car as he was the one that bought the car for her and so he had every right to retrieve it.

It took the intervention of the security personnel at the scene with the assistance of the LASTMA officials deployed to the area to stop the husband from beating his wife further.

The alleged side chic was spotted away from the scene while the man was battering his wife.

Did Jackie Chan, the 59-year-old action star who does his own stunts, really fall to his death while filming a movie in Austria? Facebook Comments

Another Fulani herdsmen attack has happened in Abbi Community in Uzo-Uwani Local Government Area, Enugu State, the invasion of the area by Fulani herdsmen who unleashed mayhem on the people, killing a brother and sister apart from razing down about seven houses and several motorcycles has left the community in chaos. Facebook Comments

Following the recent attacks on taxes and trade policies by president Trump got it hot recently when he was slapped by John McCain over the effects of these policies on our country. According to Trump ‘’China has been asked to develop a plan for the year of a One Billion Dollar reduction in their massive […]