Sultry Ghana/Nigerian actress, Christabel Ekeh, has never failed to get all eyes looking in her direction with her below-the-belt antics and theatrics.  Her Instagram account is loaded with provocative pictures and videos of all sorts. But days ago, the actress simply went over the edge and got many thinking if she had not lost it. She posted her naked pictures, in several poses. When I say stark naked, the actress was not wearing a thing! 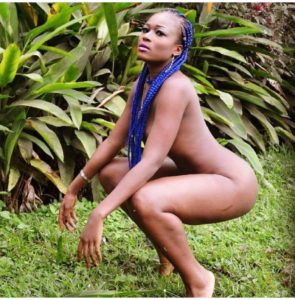 In the stark nude pictures, she was sitting bare, Yoga-style, backing the camera with an inscription ‘fuck u’ bold at her back.

Many people thought it couldn’t have been her sharing such obscenity, that her account could have been hacked. But in an interview with Joy TV, the pretty actress, admitted posting them herself, saying she was only introducing ‘the new her’ to the world.

“I want the world to see new Christabel. I was only introducing my new self. New Christabel is new, whoever you can imagine. That’s why I’m not wearing anything. So, whatever you want to wear on me, that’s your imagination,” She dismissed speculations that her account may have been hacked and the pictures were posted by someone else.

50 Cent beats body guard to death for disobeying him

The popular hip-hop star Curtis James Jackson III (born July 6, 1975) popularly known as 50 cent beat his body guard to death for disobeying and making mockery of him in a show Friday night in LA. Facebook Comments

All herdsmen are farmers (animal farmers) but not all farmers are herdsmen. The crop farmers consider the livestock farmers a worthy ally in the whole process of making food. Facebook Comments

I didn’t assault anyone at the airport -Jim Iyke

Yesterday, a video of Nollywood actor, Jim Iyke went viral on social media showing him in a bit of an altercation with law enforcement officers at the Muritala Mohammed Airport over a case of alleged assault. The controversial actor has come out to clear the air on what really went wrong at the Lagos airport […]