Nigeria has taken delivery of some military gunships following the arrival of the Antonov aircraft from Russia. The airlift cargo aircraft bearing the 2 additional brand new Mi-35M helicopter gunships touched down at the Nigerian Air Force NAF Base in Makurdi, Benue state at exactly 12.20pm.

Top military personnel were on ground to take delivery of the brand new helicopter gunships. 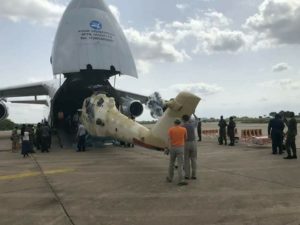 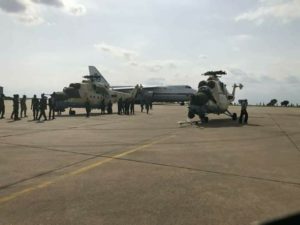 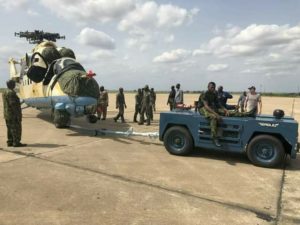 Receiving the aircraft at the flight line of the Tactical Air Command (TAC) of the NAF Base, in Makurdi, on Monday, Chief of Aircraft Engineering, NAF Headquarters, Abuja, AVM Abdulganiyu Olabisi, disclosed that the newly-acquired aircraft would, in a few days time, be assembled and taken to Kaduna where they would be officially inducted as part of the 54th NAF Day celebration.

“We are aware of the prevailing security situation in the country and the effort the federal government is making to ensure that every part of Nigeria is safe and secured. It is part of this concerted effort that the NAF is taking delivery of a second batch of two MI35M Combat helicopters from Russia.

“The helicopters in a few days from now will be assembled. We are happy that we have a team of Russian engineers who are going to assist in the reassembling of these helicopters. Thereafter, they would be taken to Kaduna where they will be officially inducted as part of the 54th NAF Day celebration. Thereafter, the helicopters will be deployed to conflict zones,”

Also speaking, Director, Public Relations and Information, NAF Headquarters Abuja, AVM Olatokunbo Adesanya said that the MI-35M helicopter is one of the most sophisticated aircrafts in the category of the MI-35 gunships which has a unique feature of night fighting capacity.

At the much-heralded Mentorship programme yesterday, Dr. Patrick Ifeanyi Ubah kicked-off by encouraging the youths to embrace the virtue of forgiveness while eschewing prolonged bitterness as this could hinder the blessings directed their way by God. Dr. Ubah also made a public declaration and plea to everyone, supporters and well-wishers alike; imploring them to desist […]

Following the shootings in Parkland, Southern Florida which left 17 people dead and 15 hospitalized, the president of the United states of America has described the suspect as mentally disturbed. Facebook Comments