Cornelius Chiadi Ezeibekwe, 25, recently caused a stir in Ekwulobia in Aguata local government area of Anambra State when he wedded his younger sister, aged 17. In Igbo land, such a marriage is a taboo and it was on the basis of this that youths of the communi 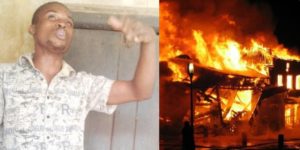 ty burnt down the Sabbath Church where Chiadi and his sister were thought to have been joined as husband and wife. Chiadi, the sixth of 10 children (eight boys and two girls) by Mr. Louis Ezeibekwe, is a mathematics teacher at Community Secondary School, Isuofia, also in Aguata local government area. At the time Sunday Vanguard visited their home at Agba, Ekwulobia, Chiadi was busy marking examination scripts and there was nothing in the compound to indicate that any abnormal thing happened there.

His sister is a student of Federal Government Technical College, Awka, but she left school to enable her observe what Sabbath people call ‘Shimta’. During the observation, which Chiadi said lasts for one year, she must remain in the compound. It was during the observation that the marriage took place. Before then, she had left school because of the controversy generated by her marriage with her elder brother.

Louis Ezeibekwe, their father, 78, and who recently buried his mother who died at the age of over 100, appeared not to be in control of the behavior of his children as he exhibited signs that all was not well with his health. His eldest son, Emeka, who lives in Port Harcourt and who is not a member of the Sabbath Church, said he belongs to the Winners Church. He also confirmed that their father was not well. Though members of the family were originally Catholics, they later changed to Seventh Day Adventist Church and subsequently to their own brand of Sabbath worship, with Paul, one of the children of Louis Ezeibekwe, as pastor.

Justifying his reason for marrying his sister, Chiadi said: “I am a Sabbath and, in searching through the scriptures, I discovered that one could marry his sibling. So, we went ahead with the arrangement to marry my younger sister.

“The marriage ceremony was observed inside our family compound, which also serves as a place of worship for us. My immediate elder brother, Paul Ezeibekwe, the pastor, was present during the ceremony.

“What happened is that when we decided to get married, we told our parents our intention and my father asked us if we knew what we were about to do. I told him that we searched through the scriptures and that God sanctioned it. It was after this that our parents consented.

“However, our other relations objected to the idea when they learnt of the plan and when we ignored them and went ahead with the marriage, they and other villagers burnt the Sabbath Church where we used to worship because they thought it was in that place that we worship, not knowing that we have since abandoned the place and worship in our compound. The burning of the church does not mean anything to us.

“God told me to marry my sister and she also saw same vision. There are places in the Bible that support such marriage. Those in doubt should read Songs of Solomon Chapters 4 and 5 and 1st Corinthians Chapter 7.

“Since we took this decision, I have not felt anything unusual, or felt that I did anything wrong. In the school where I teach, many people ask me about it and I boldly refer them to the Bible”.

Worried by the development in the community, some elders went to the traditional prime minister of Ekwulobia, Chief Gabriel Ezeukwu, to lodge a complaint because the traditional ruler of the area, Igwe Emmanuel Onyeneke, is out of the country.

After consultations with other elders in the community, Ezeukwu ordered that the marriage be dissolved and a cleansing of the community of the bad omen arranged. Sunday Vanguard gathered that the Parish Priest of St Joseph’s Catholic Church, Ekwulobia is handling the cleansing process, especially when it was realized that the family was originally Catholic.

Asked if he would subject himself to the cleansing by the Catholic Church, Chiadi said in as much as he would not like to break the law of the land, he would leave everything to God to decide because it was God that gave him the vision to marry his sister.

He said further: “Except my eldest brother, Emeka, other members of the family supported the marriage and our father only changed their minds following the uproar generated by our action. It is not the beauty of my sister that made me to marry her. The attraction is that when God wants you to do something, you should do it.

“One of the reasons for marrying my sister is to avoid divorce which is rampant these days because even if we divorce, we will remain in the same family. Besides, by marrying one’s sibling, there will not be the possibility of introducing ugly situations, like diseases or social vices into the family”.

The traditional prime minister of Ekwulobia, Ezeukwu, a mass communication lecturer at Madonna University, Okija, said the people of that village reported the matter to him.

He said: “Before coming to me, they were considering various options, including whether to involve the police, resort to jungle justice or parade those involved round the town before subjecting them to other rituals.

“But I advised that the first thing was to investigate the matter thoroughly. I personally went to their compound and met their parents. I did not see the young man involved and when I was told that he was teaching at Community Secondary School, Isuofia, I went there, but still did not find him.

“I saw a burnt structure that looked like a church beside their house and I urged those who gathered at the scene to disappear in their own interest.

“Because what they committed was a cultural offence, I invited the family to my house. I knew that what they did was bad and I ensured that the matter did not escalate by further unwholesome action.

“But when I invited the family, their mother and children ran to Abakaliki, Ebonyi State where their mother hailed from. I sent a delegation to the area and their people confirmed that it is also not in their culture for someone to marry his biological sister.

“After receiving the information, I summoned a meeting of the Igwe’s Cabinet and members of the family and we deliberated on the issue for several days until the children admitted that they committed atrocity. I made it known to them that they will purify the land and that is why we went to the Parish Priest of St Joseph’s Catholic Church, which is the family’s original church.

“However, I ensured that the girl in question was subjected to rigorous pregnancy test to ascertain that she had not been impregnated by her brother and, after several tests, it was confirmed that she was not pregnant, which is a relief to everybody.”

Ezeukwu said they met with the Parish Priest four days ago on the purification process, expressing delight that the affected family was already showing remorse. According to him, March 17, 2018 has been fixed for the purification ceremony.

He said the surprising thing was that even the Sabbath Church, which the young man claimed supports such marriage, had since denied and disowned them, advising that the development in Ezeibejwe’s family should serve as a lesson to everybody.

The good thing is that the eldest son of the family, Emeka, 33, has vowed that nothing would make his siblings get married, adding that he had never heard such a thing in Igbo land. “I cannot be alive and see them live as husband and wife in this compound,” he insisted.

Trump’s personal lawyer Michael Cohen admitted paying off Stormy Daniels on Thursday. According to him, Cohen insisted he paid the cash from his own funds but did not say why he had done so – reigniting claims it was intended to keep Daniels’ quiet about the alleged affair. Facebook Comments