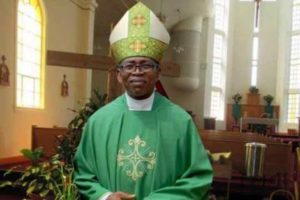 Archbishop AJV Obinna according to sources truly escaped thorough beating by Jeff Nwoha and his
Ugwumba Movement, thanks to numerous Catholic Priests, Knights of the Catholic Church and Christian fathers, who barricaded and shielded the Archbishop almost being beating up, after rain of abuse and insults to the Archbishop by the Ugwumba Movement and their leader.

The Chief mourner, Sir Alex Mbata, the Pro-Chancellor of Imo State University was shocked watching Imo State Chief of Staff, Ugwumba Uche
Nwosu and the wife of the governor, Nneoma Nkechi Rochas Okorocha seating in church front row watching their supporters abuse the most
revered Catholic Archbishop, desecrating both the alter of God and the dead body of his late mother
without calling them to order, as he angrily warned to deal with the government thugs if the madness
did not stop, our source revealed.

According to information gathrted by SGB, trouble started when the Archbishop told the cobgregation to go and get their PVC abd strongly condembed in strong terms the bad government of Owelle Rochas Okorocha and his plan to hand over to his son-in-law Uche Nwosu. While he was still speaking, an APC chieftain reportedly took microphone
from him to defend the government. A PDP follower also came and called for change from APC misrule.

It was at that point Jeff and his
thugs rushed to the alter to take the microphone from the Archbishop who withdrew to his seat and
priests and Christian fathers struggled to keep them out. Uche Nwosu and Nkechi Okorocha sat there enjoying the spectacle without stopping Jeff as Jeff pointed at Archbishop in the face and rained insults on him as the mass went on”

The Rivers State Chapter of All Progressives Congress, APC, has uncovered plan by a group sponsored by Gov. Nyesom Wike and the Peoples Democratic Party, PDP, to destabilize Saturday’s APC Congresses in Rivers State, adding that the group which is suspected to have some members of APC in their fold have already gone to work. […]

The Ministry of Justice under the Minister of Justice/Attorney-General of the Federation Abubakar Malami with the approval of President Mohammadu Buhari have released 475 Boko haram suspects on grounds of lack of evidence. Facebook Comments